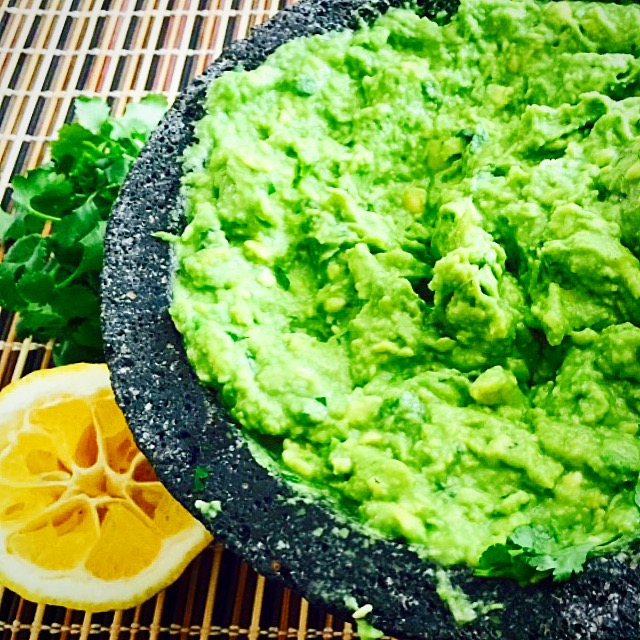 Growing up in Maryland, I did not encounter avocados very often.  In fact, I barely remember the food registering on my culinary radar.  Then I arrived in California.  Restaurant menus asked me if I wanted avocado added to salads and veggie burgers.  Farmers markets boasted multiples brands of avocados (who knew there such thing as a Bacon avocado?!?!).  Grocery stores devoted large spaces to display the green, bumpy skinned fruit.  I began to make up for lost time.  I greedily added avocado to all of my entrees and purchased more avocados than I could eat.  There was no such thing as over-doing it.

I was flipping through the Cafe Gratitude

cookbook one day (one of my favorites!) and landed on a guacamole recipe.  I realized that I had never actually made guacamole.  It seemed like a grave oversight that needed to be remedied immediately.  The recipe was simple — one I could make in less than 10 minutes.

Since that day, I have mashed avocados, chopped cilantro, squeezed lemon, chopped jalapeno peppers, and pinched salt countless times to make this guacamole.

Guacamole is as versatile as it is tasty.  It is perfect for a dinner party appetizer or to bring as a beach day snack.  I throw it on wraps, scoop it up with chips, and have been known to eat it straight out of the bowl with a spoon!  I hope you enjoy it as much as I have!!