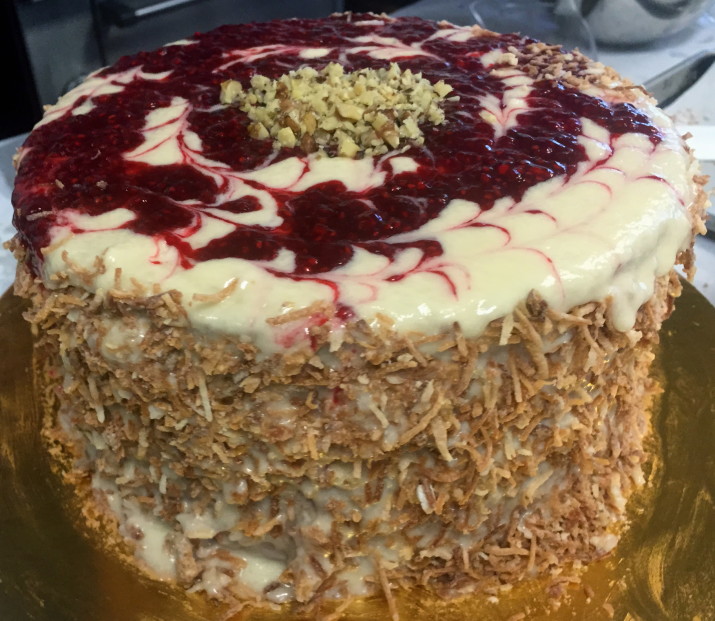 Coconut and Chocolate Cake from My Vegan Baking Class!

I love vegan cooking classes.  I always come away with recipes and a renewed enthusiasm for vegan food.   To say that my baby has been occupying my time recently would be an understatement, because I realized I had not attended a cooking class in over  year!  Then last week, I was on Facebook and saw a post about an upcoming vegan cake class with Liz Gary (she teaches wonderful vegan cooking classes!).  My husband said he would be on baby duty, so I giddily drove myself over to the Art Institute for the class a few days later.

The kitchen was spacious and stocked with anything a baker might need — bowls, pans, trays, ovens, sinks etc…  Liz also had set up four cake stations (we would be making coconut, chocolate, carrot, and vanilla cakes) with recipes, mixers, spoons, whisks, and ingredients.  In short, it was a baker’s paradise. 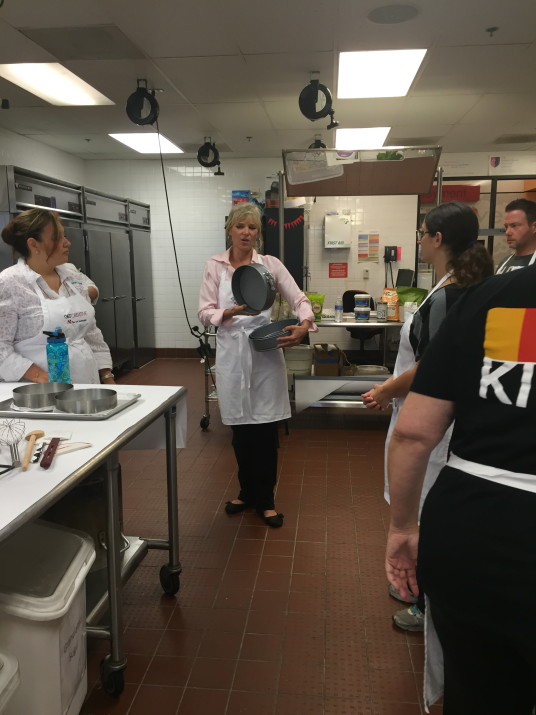 I decided to help make the coconut cake.  This coconut cake is serious about coconut.  It’s base is made from coconut batter batter that then has shredded coconut mixed into it.  The cake is topped with coconut icing and sprinkled with toasted coconut!!

First we added the dry ingredients to a bowl. 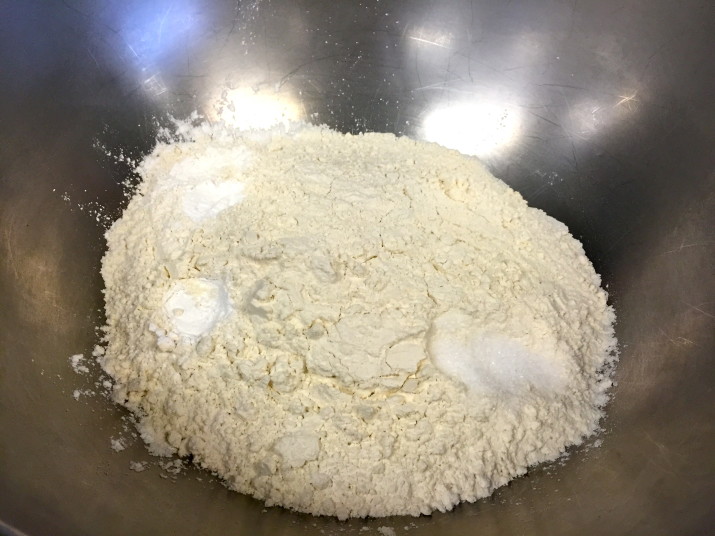 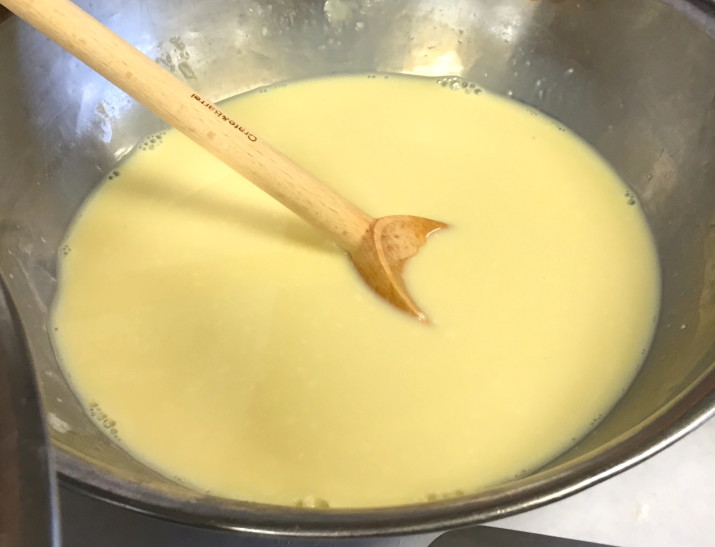 We then slowly added the dry ingredients to the buttermilk mixture and mixed in the shredded coconut. 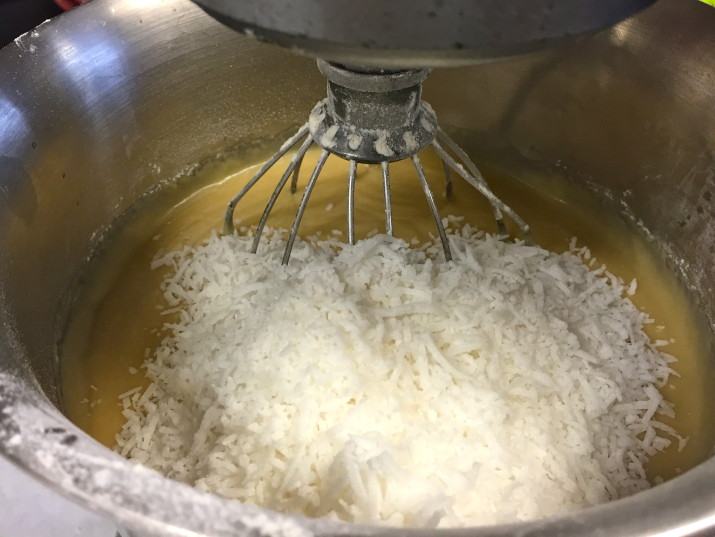 Pour the batter (half and half) into the two pans.  Please note that the recipe below for this cake is for one 8 inch round cake.  If you want to make a double layer cake like we did in class, you will need to double the recipe.

While the cakes begin to bake in the oven, it’s time to start on the icing! 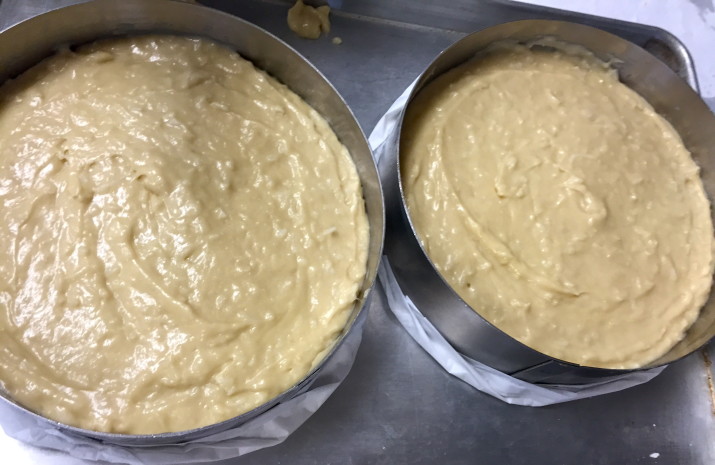 Place the powdered sugar, non-hydrogenated shortening, and vegan butter together in a bowl. 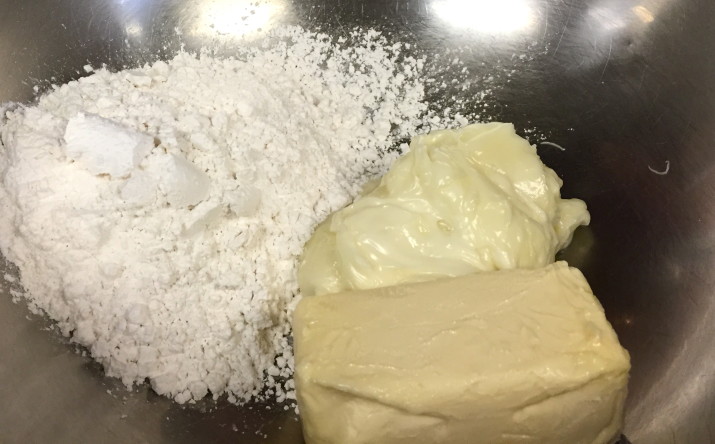 After we mixed our icing together and added in the coconut extract, we decided to add a few tablespoons of almond milk to thin it out a little.  And because the kitchen was getting hot with cakes baking, we stored the icing in the fridge! 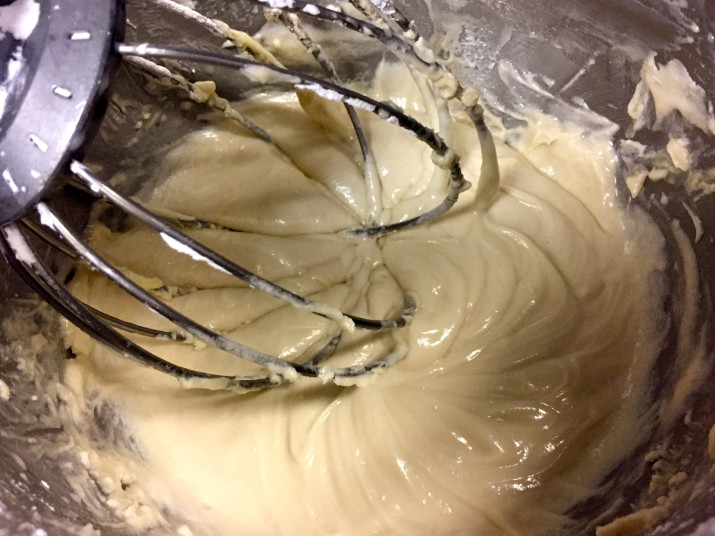 Up next, was the toasted coconut topping — a simple mix of shredded coconut and powdered sugar.  After a few minutes in the oven, the coconut was toasted and smelled delicious.  It’s definitely worth sneaking a taste of this on its own! 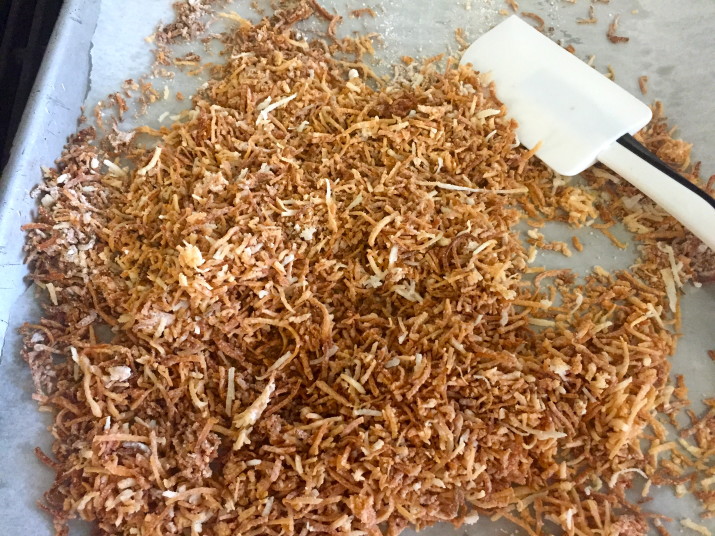 Once the cake cooked and cooled (well it had sort of cooled…more on that later), it’s important to make the tops of the cakes level, so you can stack them. 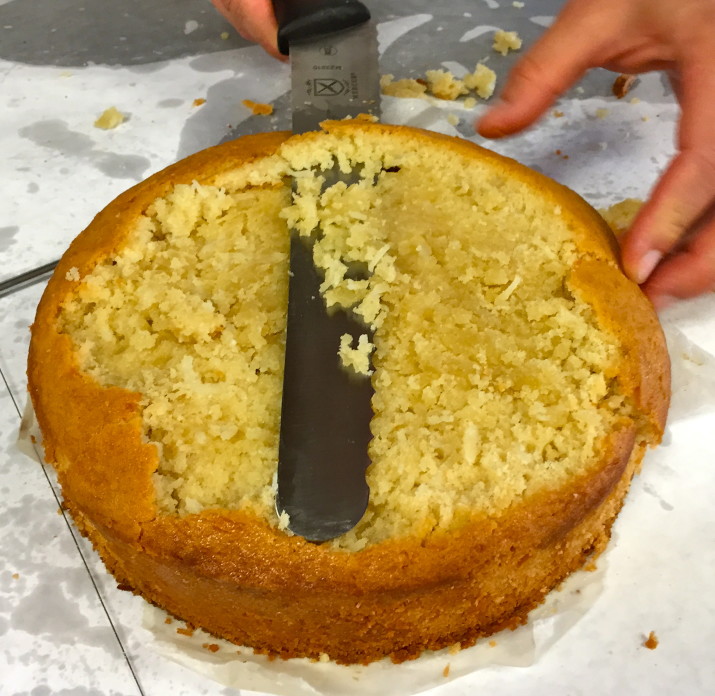 It was then icing time.  Liz had an excellent tip: put some icing on the cake stand before placing the cake on the surface.  The icing will act as an anchor, so the cakes won’t move while they are being iced. 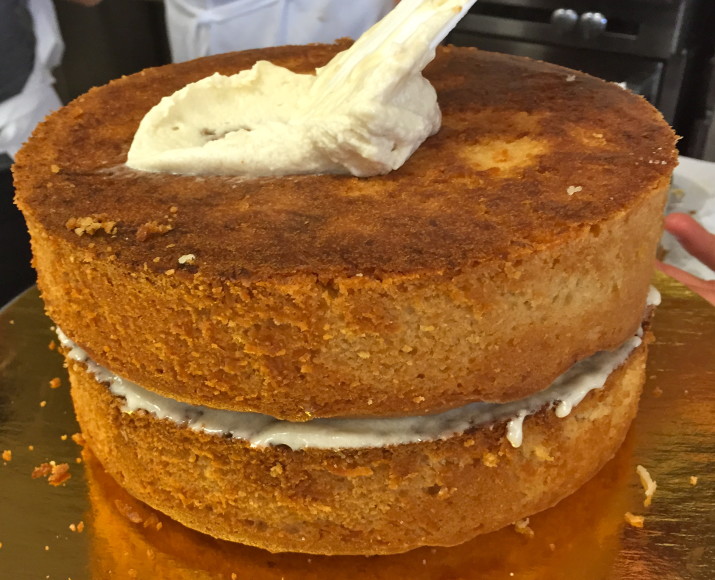 As you can probably tell from the below picture, we did not have time to let our cake fully cool before icing it.  The coconut cake (I think because of the shredded coconut), is a fairly dense cake.  So if you are making this cake, remember to allow plenty of time for it to cool! 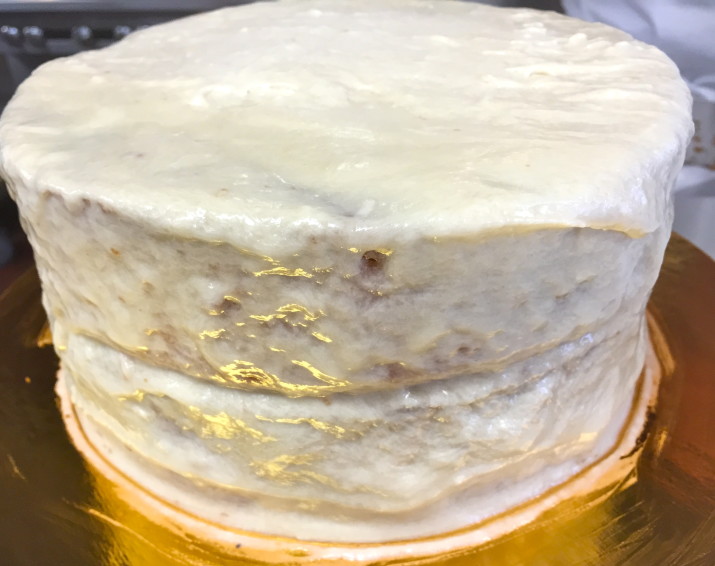 We then added the toasted coconut to the sides of the cake.  We also borrowed some raspberry topping (from another cake recipe) to play around with marbling.  And although we did not achieve professional results, that’s why classes are fun.  There are new techniques to try and no pressure to master them!

Another bonus of the class?  Everyone got to take a piece of each cake home!

More Information About the Class:

If you think the cake class sounds fun, Liz is teaching it again on August 15.  The class is held at the Art Institute in Mission Valley and put on by their GetCreative program (the section that offers fun one time classes.)  Check out the Art Institute’s website for more information.  There are also a few other vegan offerings — think cacao as a superfood — on the list that look interesting.  Finally, there is currently a Groupon you can use for the baking class!!

And because I love vegan desserts, I wanted to share a second vegan cake recipe from the class — the chocolate cake with chocolate icing.  Truly decadent. 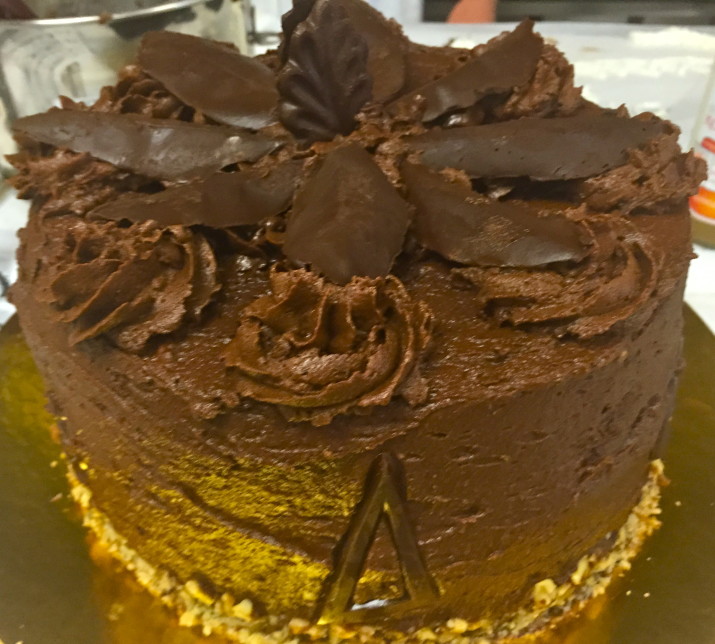