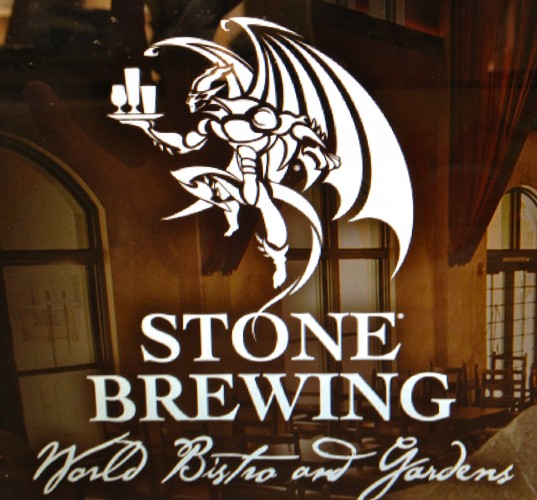 POINT LOMA and ESCONDIDO.  Quite simply, Stone Brewing World Bistro and Gardens is like no other restaurant in San Diego.  Stone Brewing’s food – the restaurant is committed to using local and organic produce and its ambiance – quiet, nature inspired open spaces, make a trip to the restaurant an unforgettable experience.

I first heard the phrase “Meatless Monday” a few years a go on an NPR segment reporting on a group of Manhattan restaurants that had decided to take meat off of their Monday menus.  I was excited that some of the most talented chefs in America were going to devote their efforts to meatless dishes!

It turns out that Meatless Monday has a surprising history.  During World War I, the United States was focused on feeding its soldiers and its European allies.  The newly formed U.S. Food Administration declared that “food will win the war” and encouraged Americans to participate in “Meatless Mondays” and “Wheatless Wednesdays” so more food could be sent to Europe.  If you are interested in learning more about Meatless Monday’s history click on the link below!

In 2003, two heavyweights re-introduced the idea of Meatless Monday.  Health advocate, Sid Lerner, in association with Johns Hopkins Bloomberg School of Public Health’s Center for a Livable Future, framed Meatless Monday as a health campaign to raise awareness about excessive meat consumption.  In the following years, the idea has gained momentum worldwide.  More information can be found at the following website:

Stone Brewing has two locations: Escondido and Liberty Station.  Every Monday servers hand out special meatless menus.  All items are vegetarian and many are vegan or can be made vegan.  Although the regular menu is also available, Stone Brewing Liberty Station estimated that 55% of the patrons order from the Meatless Monday menu!

I was very excited to have my first Meatless Monday experience at Stone Brewing and started by ordering the Housemade Kimchi—a spicy Korean style mix of fermented cabbage and vegetables.  This appetizer is spicy and tangy.  It takes the edge off of hunger without ruining your appetite.  I don’t want to digress too many times, but in case you haven’t heard, fermented foods are GOOD for you! For more information on why, check out this link:

Next up was the BBQ Avocado Taco Trio.  Fried avocado, Stone Levitation Ale BBQ Sauce , microgreens, and habanero-pineapple salsa are served on local Esperanza corn tortillas.  Brown rice, black beans, and tomatillo salsa dress up the rest of the plate  Don’t forget to ask your server to skip the Asiago cheese to make this dish vegan!

Fried avocado for the base of this vegan taco embodies creativity.  The breaded exterior of the avocado contrasts nicely with its smooth, creamy interior.  The BBQ sauce and habanero-pineapple salsa add spice and additional flavor.  The tortillas are soft and warm, and the beans and rice are expertly seasoned.  A great choice for a lunch or dinner entrée.

Finally, we tried the Tempeh “Fuego Burger.”   The burger is made from house-made tempeh, topped with aioli and sliced jalapenos, and served with a side of chile lime tortilla chips.  Again, don’t forget to order this one without Cheddar cheese to “veganize” the dish.

For me, tempeh has the best texture of all the meat substitutes and gives this patty a hearty consistency.  Plus, the jalapenos added spice.  However, I suspect that this burger benefits from the salty Cheddar cheese that tops the non-vegan version.  Perhaps, Stone Brewing will start offering vegan cheese in the future.  Normally, I am not a “chip person.”  I tend to like sweets.  These chips, however, were special.  They were extra crispy and had a delicious salty lime flavor.  I could not stop eating them.

If you should find yourself at Stone Brewing on a day besides Monday, don’t worry! Vegan options are still available.  There is an excellent Housemade Hummus appetizer, and many of the salads can be made vegan, if you order them without cheese.  The vean Tempeh Shepherd’s Pie entrée is available on the regular menu.   The Fussy Fork Tips: (1) you can substitute tofu for Chicken to make the Yakisoba vegan and (2) Stone can prepare vegan mashed potatoes!

Stone’s 19-acre farm is close to the Escondido location and offers guided tours.  For more information on the farm click on:

After 4 years of development including 2 years of construction, the Liberty Station location rivals its Escondido counterpart.  On May 15, 2013, the doors opened and the crowds followed.

The restaurant was huge, the ceilings tall, and the outdoor patio expansive. Upon further exploration, I found dining alcoves, indoor and outdoor bars, seating areas with rocking chairs, and a bocce ball court.  Stone can seat 720 but holds 1,200.

The word is definitely out.  Both locations are BUSY.  Make a reservation or arrive ready to relax until a table is ready.